Here's the full article and link to the full page spread in Austin Fit Magazine!

Through our Zoom call, Anna Sullivan held up the palm of her hand.

“If you’re [not]familiar with how we do things there, we always like [to]point to a hand,” Sullivan says.

Anna Sullivan and her husband, Sean, founders of the Austin-based food brand, Real Food Bar, are both originally from Michigan and grew up in the Great Lake State.

“I’m from northern Michigan,” she explains, pointing to the top of her hand. “So I’m from up here, and my husband’s from down here in Detroit. We met kind of in the middle after graduation.”

After graduating from Michigan State University with a degree in Political Science and International Relations, Sullivan had hoped to join a mission-based volunteering organization like the Peace Corps or the Foreign Service.

“That had always been my dream,” she says. “And then life kind of hits you.”

In 2012, the couple met while they were both volunteering at a call bank for the presidential election. A year later, they got engaged and have now been married for six years.

At a certain point in her life, Anna found herself in a demanding position that required working 60-hour weeks, and she found that she didn’t have time to put together a nutritious meal.

“My sweet husband would try to prepare lunches and … we would often be running out the door. We [had]every intention of being able to eat our lunch, but I often would forget it in the car, or it would sit in the fridge and it would go to waste or spoil. That was super frustrating for us,” Sullivan explains.

In moments of weakness after working long hours at her office, Sullivan would either grab a quick candy bar or skip the meal altogether. To find a way around this issue, Sullivan and her husband started making healthy, nutritious, meal-replacement bars and, with her husband’s entrepreneurial background, explored the possibility of making it into a business. 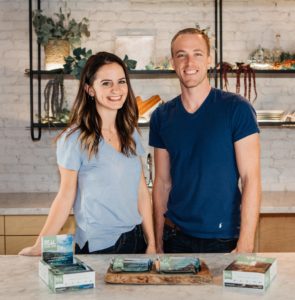 Sullivan knew she wanted the bars to primarily act as a meal replacement for those with similar, busy or on-the-go lifestyles, while also not having to sacrifice any nutritional value. As they tested and tweaked the bars, the couple grew closer to a successful recipe with the right amount of sweetness, nutritional value and stickiness they had been looking for.

Next, the Sullivans sent the bars to their friends to taste test. Not long after, their friends came to them again and again, wanting more. Finally, Anna and Sean worked with a food scientist to achieve the nutritional profile they were looking for and created their first bar.

After a year of producing the single flavor, the couple expanded into three flavors (Peanut Butter, Cherry Cashew and Chocolate Sea Salt) and formally launched their brand in 2019 — landing an account with HEB in the process. Not long after, the Sullivans decided to make their new home in Austin, Texas.

“We just fell in love with Austin — it’s a great place to start a business,” Sullivan says.

After hearing feedback from customers, the couple then decided to make the product vegan by switching out the honey used for sweetness to blue agave. This recoup in the process allowed them to introduce a new aspect to the brand, one they had always wanted to incorporate: sustainability.

To play their part in making a positive impact, the brand places an emphasis on upcycling, which is the use of foods that have been deemed “imperfect” or unable to sell based on being too close to the expiration date, color, etc.

On our call, Sullivan expressed the importance of upcycling and/or utilizing sustainable practices, especially in the food industry.

“There’s this huge problem of food waste in our supply chain where there’s just this mismatch of supply and demand,” Sullivan says.

She’s right — it’s estimated that over 80 billion pounds of food and 40% of the U.S. food supply are wasted annually, according to Nutrition Connect. And, in the year 2020 with the COVID-19 pandemic, much more food went to waste. Even the New York Times reported farmers dumping milk and smashing eggs that were unable to be sold with the shutdowns.

“It’s just really crazy. The level of food waste that occurs across the board, and I think that there’s a lot of opportunity for some unique technology to match supply and demand that I think we all have a vested interest in,” Sullivan says.

Sullivan says that, ever since she was little, eating food with a low level of processing, getting it as close to the source, has always been important to her.

“So we feel like, on our end, with a small bar, we can make a big impact into reducing food waste, not only on the agricultural side where that’s the big source of waste but also on the consumer side, by having a bar that’s a high shelf life,” Sullivan says.

×
You can use this widget to input text into the page.